AMDs recent APUs have put AMD back on the map, so we are delighted offer this exceptionally quiet PC based around their fantastic multi-core processors. 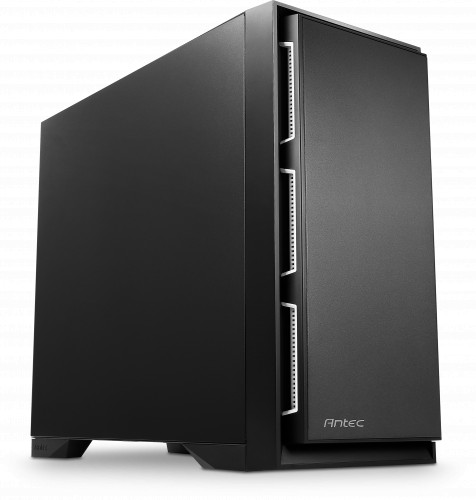 We are proud to announce our quiet fanned AMD PC housed in the fantastic Antec P101 Silent chassis, which is a perfect choice as it features sound insulation material throughout. At the core of the PC is an AMD processor which offer performance improvements compared to previous generations. The AMD processors incorporate multiple cores and threads, which allow them to excel at multi-core processing events such as gaming, video editing, photo-processing, while simultaneously running other programs. It is the perfect system for customers looking for an inconspicuous PC for general home / office use.

Our aim is to provide one of the world’s quietest AMD based PCs without compromising performance. We have therefore chosen only the best and quietest components for this PC. The AMD processors are supplied with a CPU cooler, which are reasonable in terms of quietness. But we highly recommend that you opt for one of the coolers in the configurator as they will not only perform better but will also be much quieter. Our recommendation is the Noctua NF-U12S SE-AM4 which is an excellent CPU cooler and being from Noctua it is exceptionally quiet.

As for graphics, we have only made available either totally fanless cards or cards that can run semi-passively, meaning the fan will only rotate when the GPU exceeds a certain temperature. This means that only noise will be generated when you are pushing the PC, for example during gaming or while running other graphical programs. Alternatively, you may want to opt for a processors that includes Radeon Vega Graphics. This not only negates the use of a discrete graphics card but it will also reduce the overall cost of the system. See “Graphics Card Options” below for more information. 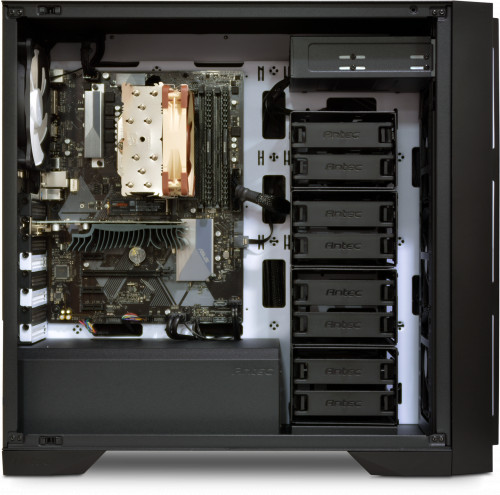 The Ryzen Serenity is configurable with a choice of two motherboard. Both motherboards are from ASUS, the PRIME X470-Pro and the PRIME B450-Plus. The main difference between them is the chipset used. The X470 offers more features over the B450. For example the X470 has more USB3.1 (gen1) ports, more SATA ports and also supports Nvidia SLI. The X470 also has two USB3.1 (gen2) ports, one Type-C and one Type-A, whereas the B450 has two Type-A USB3.1 (gen2) ports. The below images show the differences between the I/O ports found at the rear of the PC.

Some of the processors available with this system have integrated graphics, but there are some that don’t. This can be a little awkward when configuring the system, as to whether a discrete graphics card is needed or not. To try an make things clearer all processors that include built-in graphics have the following, “with Radeon Vega Graphics” in their product name.

The number within “Radeon Vega Graphics” indicates how many graphics cores each processor has. For example, the AMD Ryzen 5 2400GE with Radeon Vega 11 Graphics, has a total off 11 graphics cores. The larger the number the greater the performance.

“I bought a Quiet PC Cube, which is semi-fanless, meaning that the fan only comes on when you are really pushing it. So far it has not come on, even when I was doing heavy Photoshop work--maybe it will come on in summer, when it gets hot.

The PC has Skylake with the fastest NMVE SSD, which is four times faster than a regular SSD. I thought it was really good of them to put these specs in, as they have only just come out.

The cube is a really nice case, and you can open it and change things, without affecting the warranty, which is perfect for someone like me who is not overly technical, but likes to play around with components such as hard drives and PCIEs a little bit.

All in all, I’m truly satisfied with the experience. They deserve some credit for this.”