Built around the Gelid Black Diamond, the Serenity Gamer Z2 is perfect for anyone looking for a gaming PC that not only looks great but offers excellent value for money, thanks to the inclusion of onboard AMD Radeon graphics. 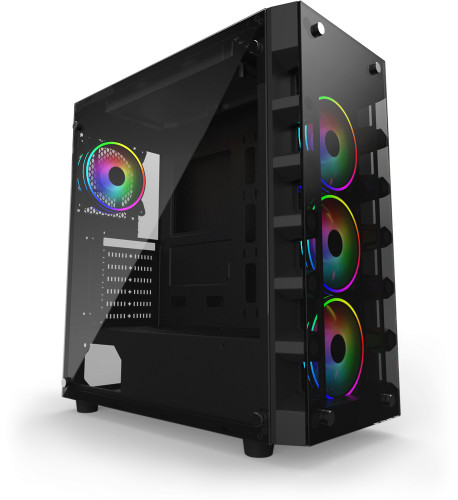 Gaming PCs have become bolder and more extravagant in terms of how they look. It was only a matter of time before we made available a PC that is not just visually striking, but one that also stood by our philosophy of being quiet. Gelid’s Black Diamond ticks all the boxes to allow us to do just that.

As you can see the system is supplied with four ARGB ring LED fans that really makes this PC stand out from the crowd. Three are installed behind the front tempered glass panel with the other at the rear of the PC. All RGB lightning is controlled by the pre-installed software that will allow you to change all aspects of the lighting, including turning it off if it is not required. It terms of noise output from the installed ARGB fans, they are all connected directly to the motherboard which controls the speed of them based on the temperature of the CPU, meaning they will increase their speed when the system is under load. At full speed the fans generate a maximum of 35 dBA at 1600RPM, but in reality this noise level is only reached when under consistent heavy load for long periods. During our testing the fans rarely exceed 1000 RPM, resulting in a much quieter experience, even during gaming.

Onboard graphics for a gaming PC, really?

AMD’s latest generation Ryzen processors with a “G” suffix now feature Radeon graphics built right into the CPU. The performance of the graphics on these processors out performs any other onboard graphics previously released. For example take the AMD Ryzen 3 PRO 4350G which can easily tackle popular games like DOTA 2, League of Legends, The Elder Scrolls V: Skyrim, CS:GO, or Rocket League at full HD (1920 x 1080) with ease. The built-in graphics also have full support for DirectX 12 and Vulkan too. Of course, if more graphical power is required then it is possible to configure the PC with a dedicated graphics card.

We would recommend opting for a graphics card if you plan to play games at a resolution higher than 1920 x 1080 or if the minimum specs for the game exceeds the GTX1050. This is because the onboard graphics is close to the performance of a GTX1050. The configurator below has the GTX1050 Ti as the next graphics card option. We believe the cost of the GTX1050 does not represent good value considering the performance of the onboard Radeon graphics.

PLEASE NOTE: Only CPUs with “Radeon Graphics” in their product name have built-in Radeon graphics. Therefore, if you opt for a processor that states “Requires Graphics” in its name then a graphics card will be required.

As with all of our systems, we use only the best available components, giving you confidence that your next PC will be reliable and perform as you’d expect for many years to come. The motherboard in this particular systems is key to the features the PC has. The ASUS TUF B550M motherboard features an array of USB 3.2 ports (inc USB Type-C), 2.5Gb ethernet port, a S/PDIF and onboard HDMI 2.1 and DisplayPort 1.4 for 4K resolution at 60Hz (assuming you are using APU graphics).

Because we use a fully-featured motherboard, the PC is a very capable unit. It can be built with up to 64 Gigabytes of memory and one of AMD’s Ryzen processors. Famous for their excellent performance/value balance, these processors have the latest architecture and offer excellent performance. We recommend a minimum memory specification of 8GB for this operating system to perform at its best.

So if you need a lot of storage space (for videos or large quantities of digital photos for example), then we would recommend an HDD. On the other hand, if you prefer silence and speed (especially boot-up speed), then an SSD or M2 drive would be a better choice. Of course you can have more than one drive, so you could have the best of both worlds by choosing one of each! We recommend that customers chose an SSD or M2 drive as a boot drive that contains the operating system and important programs and a conventional HDD to store other data, but remember that if you intend to have a totally silent PC you might want to forgo the HDDs all together as they will make some noise due to their moving parts.

Here at Quiet PC we believe that customers have every right to expect the best possible performance from a brand new PC, so every system we build comes with our Clean Build™ promise. We install the operating system (if you order one), motherboard drivers, OS updates and Windows Security - that’s it. You won’t be pestered by pop-ups and nag screens and you can get on with using your new PC immediately without having to uninstall lots of junkware first. Your new machine will boot in super-quick time and will stay running quickly for many months and years to come.

Our hardware warranty runs for at least two years and is “collect and return” meaning that you don’t need to worry about getting the machine back to us - we will instruct our courier to collect it from you on a day of your choosing, then after we have checked and repaired it we will send it back to you by express courier at our expense. In addition, unlike many other PC suppliers, we have an “open-case” policy which means you are free to open the machine and perform your own minor modifications or upgrades without worrying that your warranty might be affected.

Product was exactly as expected

Product was exactly as expected. Got here to Houston from GB faster than the other parts ordered from US vendors. I was very happy with whole process.
(Review via Trustpilot)