Position your monitors exactly where you want them with ease, thanks to Gelid’s FlexMount Duo. With seamless cables management, it features omni-flexible tilt and swivel, and even a built-in USB hub. 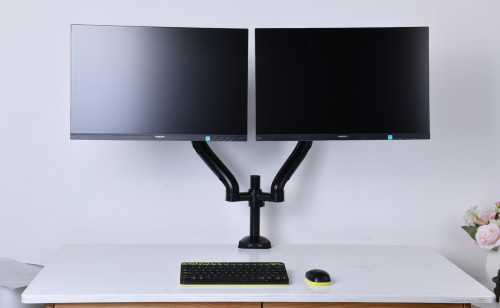 Academic studies on workstation ergonomics recommend that the top of a screen be about 5cm to 7cm above your eye level, optimal viewing distance be 50-75cm, and monitor tilt be about 15° to 20°. This arrangement can be tough in many cases and limited by design of monitor’s stand, configuration of your desk or workspace constraints. With monitor lift up to 63cm and arm extension up to 58cm, The FlexMount Duo brings in a fix for that. It allows you to decide and set for yourself the optimal position of your monitors. 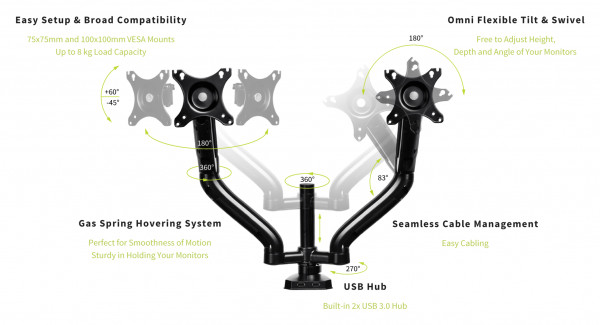 Gelid’s FlexMount Duo provides a fast-install build that comprises of edge clamps or grommet mounting for 10-100mm table thickness, supports 75x75mm and 100x100mm VESA mounts with up to 8kg load capacity per arm and handles various monitor types and sizes including ultrawide screens.

Numbers speak for themselves, straight and simple: 105° tilt, 180° swivel and 360° rotation. You are free to adjusting the height, depth and angle of your monitors. You can be 100% flexible in organising the most comfortable position for you.

Gas springs are crucial for smoothness of motion. FlexMount Duo features the gas spring arms that are sturdy in holding monitors but can be reposition smoothly with very little force. 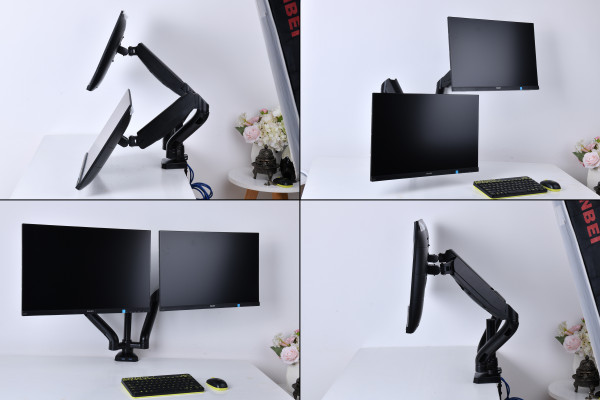 “I was very impressed with the site and …”

“I was very impressed with the site and following a number of emails to the technical support manager ordered a high spec fast set up. the PC and monitors arrived within the week and were extremely well protected for transit. After a couple of minor setbacks with getting the monitors to talk to the PC I managed to get started. I first became concerned when transferring data files from my pen drive to my HDD it appeared very slow and wouldn’t close so I overrode the shutdown and then the PC wouldn’t boot up. You can imagine the disappointment over £4000 for a PC which wouldn’t work. I contacted the support manager who immediately gave me the option of a refund or they would collect the PC, investigate and repair. I opted for the repair they collected the PC 2 days later and on the 4th day advised me it was the HDD which had broken down (nothing QPC can do about that) they said they would replace and ship the PC back to me ASAP. Another couple of days and the machine was back on my desk.

I can’t fault Quiet PC’s service, from initial enquiry through the problems and repair to return to me, no quibbles and extending help and advice throughout. the PC is excellent and so quiet sometimes I can’t believe it’s switched on.