The MicroQube Fanless is the silent version of the MicroQube Gamer. Housed in the same Thermaltake Level 20 VT chassis which features tempered glass panels and excellent air ventilation to keep things cool, silently! 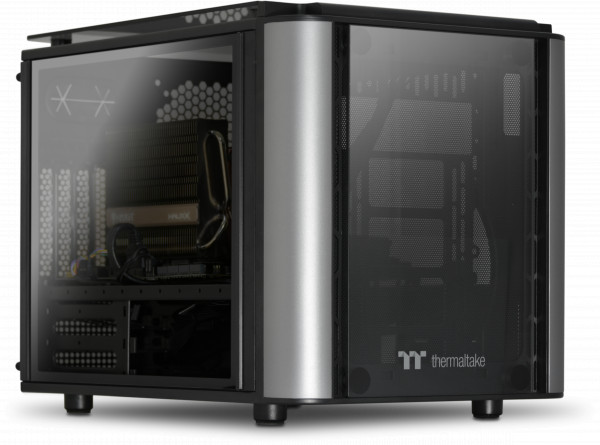 The MicroQube Fanless offers an unbeatable blend of style and substance. Standing just 348mm tall, the MicroQube can accommodate a graphics card up to 350mm in length and up to six storage drives. It features a fully-featured micro-ATX motherboard. And because we offer the latest power-frugal processors, it is cooled by a Nofan fanless CPU cooler and a fanless power supply, giving you the perfect foundation for a totally fanless and therefore silent PC.

Thanks to the unique layout of the Level 20 VT chassis the PC is split into chambers. The top chamber houses the motherboard, along with all the devices you care to connect to it. The second chamber sits directly below the motherboard where the not so attractive (but still essential) components sit like the power supply and data drives. There is space for three 2.5” drives on the side of the chassis if you wish them to be viewed from the outside of the chassis. 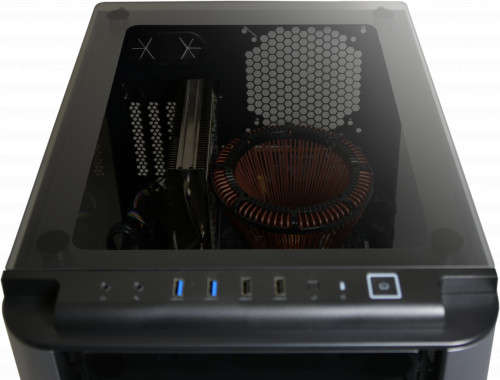 MicroQube Fanless is surround by 4mm tempered glass panels (apart from the rear and the floor), this gives an unobstructed view into the chassis allowing for some elaborate builds. To help keep temperatures down the roof of the chassis has a large gap around its circumference, which allows of the warm air generated by the CPU and the other internal components to naturally dissipate of the chassis.

This PC takes advantage of Intel’s latest CPUs, which have broken the mould as they now feature more cores and threads compared to previous generations. The Core i3 now features four cores, the Core i5 six cores, the Core i7 has either six or eight cores and the Core i9 is eight cores, which is a significant increase over the 7th gen processors. As well as an increase in core count, the amount of threads for each CPU has also gone up, meaning more multi-tasking can be achieved. These additional cores and threads really make the Intel’s latest CPUs a great performer. For example, the Core i3 8300 CPU is now equivalent in terms of performance to the 7th Gen Core i5 7600 but costs significantly less - giving you more performance for less money.

When specifying your new PC’s storage options using our system configurator below, you will be offered a choice of drives which vary by price and capacity. There are two primary types of storage. A conventional hard disk drive (HDD) offers huge storage capacity for a low price, but it won’t be especially fast and it will generate a certain amount of running noise since it contains a constantly-rotating spindle. A solid state (SSD) or a M2 drive on the other hand, offer tremendous speed and absolute silent operation, but they cost more than an HDD for any given capacity.

“I came to Quiet PC after two previous very poor experiences with online gaming PC vendors. I wish I had read the TrustPilot reviews first!

The website was extremely easy to use and the ordering / payment process could not have gone more smoothly. Quiet even managed to change a key item midway through the process without any difficulties; and (key to the whole experience) kept me fully informed throughout.

The PC (over £2k worth) arrived early. One USB hub connector was loose but the completely excellent customer service team (thanks Simon) sorted me out quick time. The willingness to put time and effort into my issue was exemplary; so too was the keeping of promises (call backs when promised etc.).

As for the PC - I could not be more pleased. Quiet does not describe it. Quiet PC should perhaps change their name to Silent PC (only a very slight exaggeration!).

One niggle that I cannot even blame Quiet for is that two of the games for which I bought the PC do not actually work with it. The game developers are still working on the problem(s) and just in case anyone is interested I will update this review when or if there is any progress.

Update: the gaming problem was two-fold - in one case a USB joystick driver incompatibility issue and the other a GPU driver update issue. It took ages to identify both but both are now completely sorted. Not a Quiet PC problem at all.”